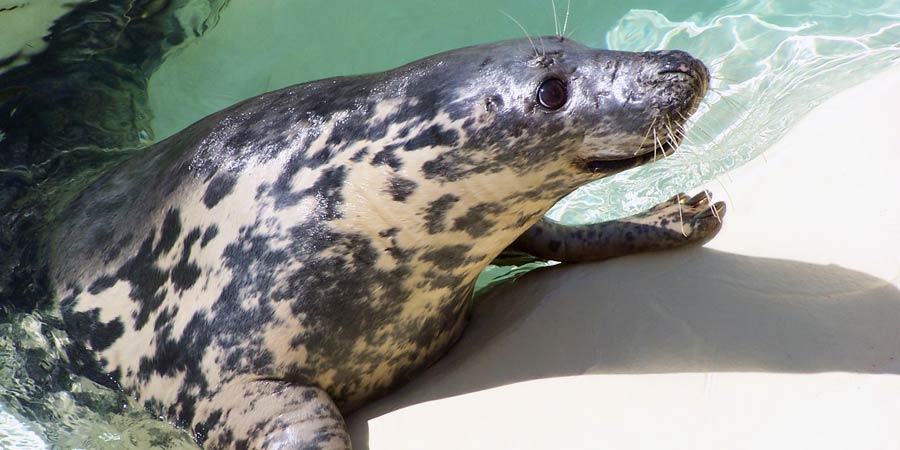 Large colonies of seals are situated in England, Scotland and Ireland. There are two small colonies of grey seals in Brittany, France at Molène-Ouessant and the Sept-Îles. The stranded seals that were recovered by our treatment centre came from these colonies.

The seals at the Biarritz Aquarium

The Aquarium has been providing a home to grey seals since its creation in 1933.

– Okéra, Titounette, Sylvestrine and Charlie (the only male in the pool) were rescued as pups aged between 1 or 2 months after being stranded on beaches along the basque and landes coastlines.
– Naïa (16 December 2005) and Noëlla (Christmas Day in 2009) were born at the Aquarium, following the mating of Charlie with Okéra.

Seals usually feed on fish. Each seal eats about 4 kg of mackerel at each meal.

They molt, shedding their fur twice a year.

Under the water, you can see them swimming or sleeping in nooks and crannies, sometimes in the most surprising positions.

Differences between seals and sea lions

There are two main characteristics that differentiate seals from sea lions :

Our seals are not trained, but we do encourage them to do different exercises for medical reasons and to facilitate medical care and contact between the keepers and animals.

Survival of the species

After a gestation period lasting 11 months, the mother seal gives birth during the winter and then feeds their single pup for 21 days before abruptly abandoning her offspring. Many young pups die as they are still too young to fend for themselves. Others are carried along by the sea currents that then wash them up onto the Atlantic coastline.

Grey seals weigh 15 kg at birth and 50 kg when they are weaned (3 weeks later), and when they are found stranded on the beaches, they only weigh 10 to 15 kg. Every year, the Biarritz Aquarium recovers 2 or 3 seals that are treated and nurtured to fatten them up, they are tagged before being released back into the wild near Brest. This operation is part of the natural heritage programme called l’Observatoire du Patrimoine Naturel.