Skip to content
Home > News > The Biarritz Aquarium has got bigger 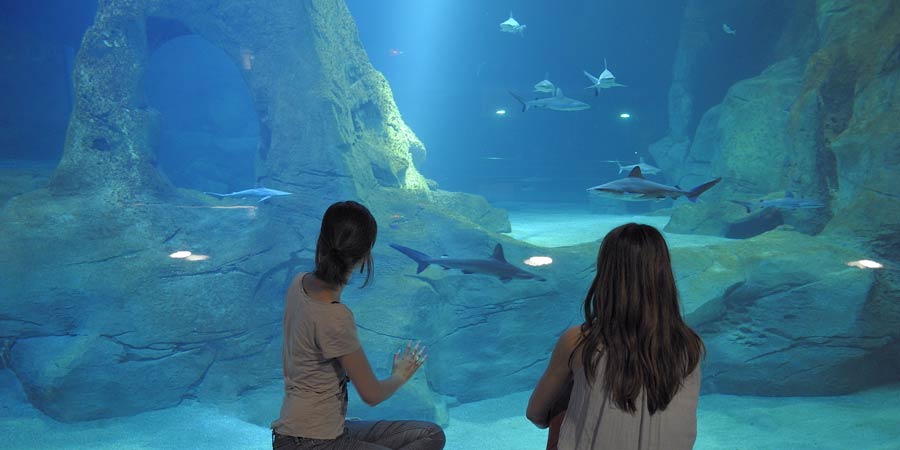 The Biarritz Aquarium has been modernised.

The surface area has doubled (from 3,500 m2 to 7,000 m2) and the circuit has been revamped. It now belongs to the family of large european aquariums.

You will still be able to admire the famous octopus, lobsters, plaice, cuckoo wrass, Bay of Biscay sea urchins, whale skeletons, the ray and turtle tanks…
Sit on the seal terrace and watch them swim, play or sunbathe…

The Aquarium invites you on a voyage along the Gulf Stream, taking you through the North Atlantic before arriving in the warm and fish-filled waters of the Caribbean Sea. Head off round South America, navigating past Cape Horn into the Pacific Ocean before arriving in Indonesia. Throughout this voyage, you will be enthralled by the flora and fauna that is typical of each of the regions. Amazement guaranteed !

The Biarritz Aquarium now reveals its magnificent panoramic aquariums filled not only with tropical fish but also the fearsome-looking scalloped hammerhead sharks.

Crystal bubbles encrusted in the rocky decor hold astonishing species such as razorfish and mischievous clown fish depicting a setting that is aesthetically pleasing, contemporary and magical.

A totally new, original and relaxing tour across the oceans and seas of our blue planet.

By doubling its surface area, the Aquarium is now equipped with :

We use cookies on our website to provide you with the most relevant experience by remembering your preferences and repeat visits. By clicking "Accept and Close", you consent to the use of ALL cookies. However, you can visit "Customize" to provide controlled consent.
Accept and close Customize
Manage consent

This website uses cookies to enhance your experience when browsing the site. Of these, cookies that are categorised as necessary are stored on your browser because they are essential for the basic functionality of the website to work. We also use third party cookies that help us analyse and understand how you use this website. These cookies will only be stored in your browser with your consent. You also have the option to decline these cookies. But disabling some of these cookies may affect your browsing experience.
Necessary Always Enabled
Necessary cookies are absolutely essential for the website to function properly. These cookies ensure basic functionalities and security features of the website, anonymously.
Functional
Functional cookies help to perform certain functionalities like sharing the content of the website on social media platforms, collect feedbacks, and other third-party features.
Analytics
Analytical cookies are used to understand how visitors interact with the website. These cookies help provide information on metrics the number of visitors, bounce rate, traffic source, etc.
Advertisement
Advertisement cookies are used to provide visitors with relevant ads and marketing campaigns. These cookies track visitors across websites and collect information to provide customized ads.
Others
Other uncategorized cookies are those that are being analyzed and have not been classified into a category as yet.
Save & Accept