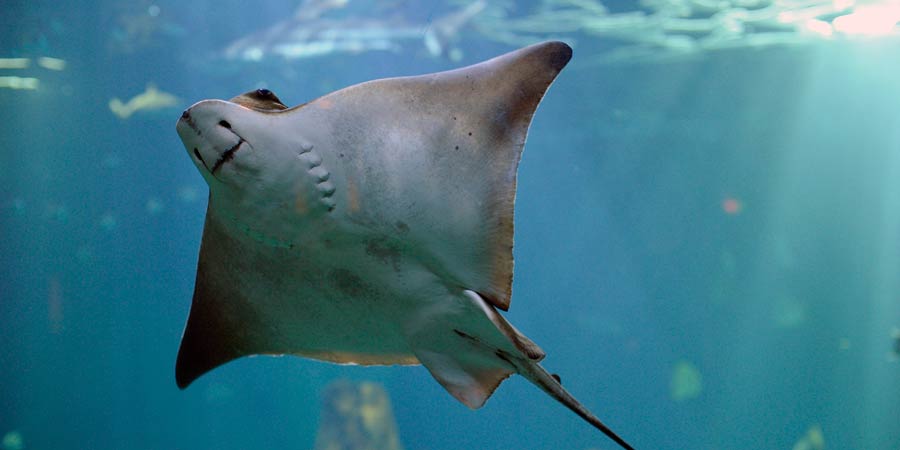 Morphology : It has a rounded snout and pointed pectoral fins. It is brown to black on its back and light, almost white on its belly. The whip-like tail is twice the length of the body.

Biology : They swim alone or in schools in open water or above the bottom. It feeds on crustaceans, bivalves or fish. It is an ovoviviparous species (babies are born already formed. They have fed and developed in eggs that have hatched inside the female). Gestation lasts 6 to 8 months and the female can give birth to several young (3 to 7).

We use cookies on our website to provide you with the most relevant experience by remembering your preferences and repeat visits. By clicking "Accept and Close", you consent to the use of ALL cookies. However, you can visit "Customize" to provide controlled consent.
Accept and close Customize
Manage consent

This website uses cookies to enhance your experience when browsing the site. Of these, cookies that are categorised as necessary are stored on your browser because they are essential for the basic functionality of the website to work. We also use third party cookies that help us analyse and understand how you use this website. These cookies will only be stored in your browser with your consent. You also have the option to decline these cookies. But disabling some of these cookies may affect your browsing experience.
Necessary Always Enabled
Necessary cookies are absolutely essential for the website to function properly. These cookies ensure basic functionalities and security features of the website, anonymously.
Functional
Functional cookies help to perform certain functionalities like sharing the content of the website on social media platforms, collect feedbacks, and other third-party features.
Analytics
Analytical cookies are used to understand how visitors interact with the website. These cookies help provide information on metrics the number of visitors, bounce rate, traffic source, etc.
Advertisement
Advertisement cookies are used to provide visitors with relevant ads and marketing campaigns. These cookies track visitors across websites and collect information to provide customized ads.
Others
Other uncategorized cookies are those that are being analyzed and have not been classified into a category as yet.
Save & Accept